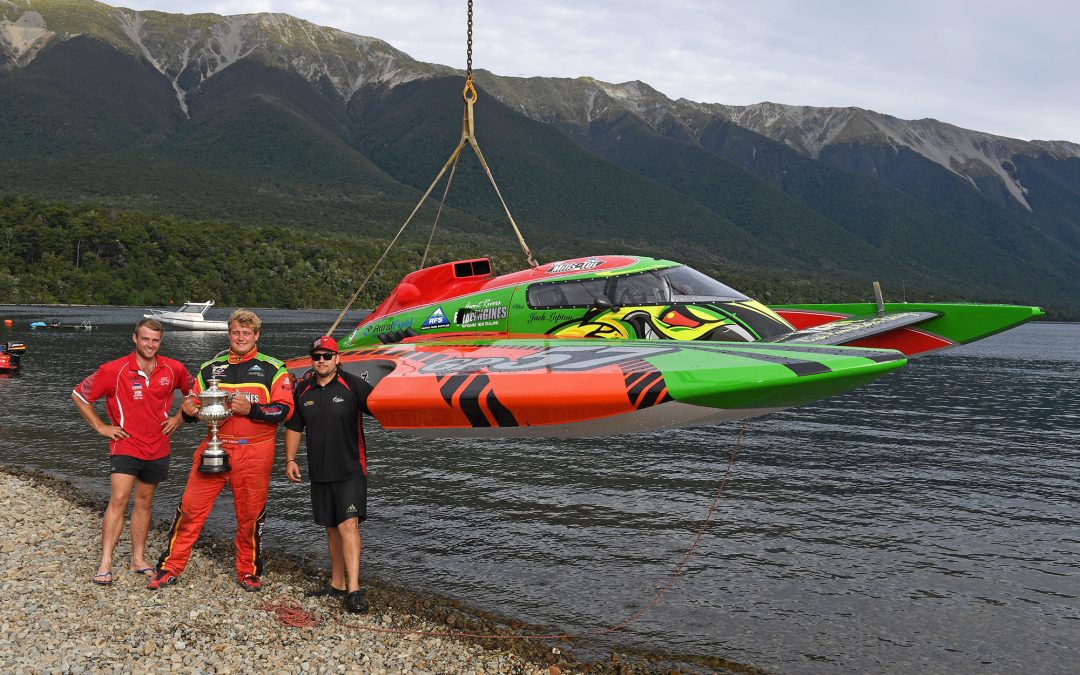 The 92nd Masport Cup was again a nail biting and exciting Grand Prix Hydroplane race. Seven of New Zealand’s top GP Hydroplanes lined up at Lake Rotoiti Nelson Lakes recently, GP57 Jack Lupton won both heats to take out the overall win. He didn’t have it all his own way though. The first heat saw a battle between Lucas Oils Ken Lupton and GP57 Jack Lupton with the thousands of spectators lined the shores to witness the deck to deck racing of the two brothers. Hot in pursuit was another battle for third and fourth placings father Warwick Lupton driving Annihilator Race Boats, The Boss Raymond Hart, Fair Warning Scott Coker and The Steeler David Alexander swapped places several times over the 3 lap 2km course reaching top speeds of 170 mph. Julian Stilwell driving his Formula One Tunnel Johnson Associates was also amongst the 300 ft rooster tails keeping close to the buoys, Stilwell out smarted the battle going on between the 2500hp hydroplanes to sneak in third in the first heat to Lucas Oils second and GP57 taking first blood.
Second heat was a different story GP57 was left chasing down Lucas Oils as he shot to the front from the start Jack Lupton tried everything to catch his brother Ken Lupton but couldn’t catch him, it looked like a win for Lucas Oils until the last lap when Ken pulled into the middle of the course leaving the final half lap to GP57 to take out the second heat and the overall win.
Drama was to happen after the heat a disqualification was given to The Boss, Raymond Hart for not holding his lane until the rounding of the first turn buoy.

After busy season for the NZ Grand Prix Hydroplanes racing several months in Australia before returning to NZ for there season they will now head to Mangere Bridge, Auckland on the 29-30th April for the final round of the Masport Hydro Thunder Series.
Already well ahead planing for 2018 the Hydro Thunder series which could see several Australian boats heading to NZ with a possibility of bringing the much sort after EC Griffiths Cup being contested here in NZ dates and venues to be finalized this month. Follow the Hydro Thunder Series on www.gphydroplane.co.nz